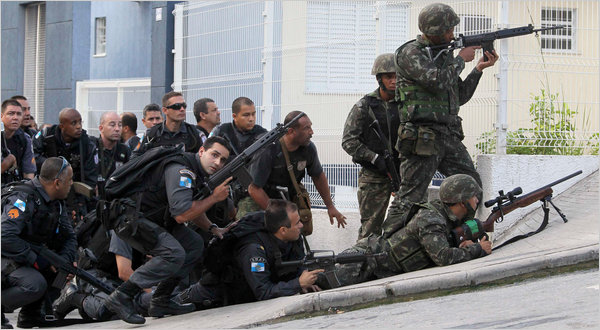 Army soldiers and police took position during an operation in Rio de Janeiro on Sunday.

By midafternoon, a wave of calm and relief swept the Alemão shantytown complex, but there was still occasional gunfire as the military police went house to house confiscating drugs and weapons.

“After an hour of confrontation, residents opened their windows and began walking in the streets,” said Commander Mario Sergio Duarte, who led the operation on Sunday. “I saw children with smiles on their faces, crying and emotion. Today we are assured of the state’s victory and the power of the state.”

The military police raised the flags of Brazil and Rio de Janeiro atop a building on the slum’s highest hill, symbolically capping a week of urban fighting that began in response to a wave of attacks by drug gangs last Sunday. Authorities said the violence was retaliation by gang members for the government’s campaign to pacify 13 of the city’s most violent slums and demonstrate control of the city in advance of the 2014 World Cup and 2016 Olympic Games.

As the 13 slums were cleared, some gang members fled to Alemão, which was considered the city’s most violent slum.

But the battle on Sunday appeared to be surprisingly quick and decisive. As of Sunday afternoon, there had been no reported deaths.

Last week, Rio’s authorities had urged the hundreds of traffickers hiding in Alemão to “surrender with arms in the air by sunset on Friday.” When traffickers refused, more than 15 armored vehicles blocked some 80 entrance points and prohibited residents from returning to their homes hours before the raid began.

The military police confiscated large quantities of drugs, ammunitions and arms on Sunday morning. Commander Duarte said his forces would “search every single house and corner.”

The police said they had more than 100 arrest warrants to execute.

For decades, a lack of day-to-day police presence in Rio’s slums allowed gangs to control territories with heavy weapons and drug trafficking. The last Alemão raid killed 19 people only two weeks before the 2007 Pan American Games.

He didn’t go to her last party.

Did he go to her last party?

BUT: Was he angry? Were they late? Could they swim?

– Take a look at  the irregular verbs list
FOOD FOR THOUGHT –
¨For decades, a lack of day-to-day police presence in Rio’s slums allowed gangs to control territories….¨.
1 – Do you agree with that? Why?Why not?
2 –   What is the great challenge  the society has to face now?
3 – Are we prepared for that?
4 – Do you think that from now on the cariocas are going to think different?
5- In your opinion,  What was correct and incorrect in this operation.