Electric cars might pollute much more than petrol or diesel-powered cars, according to new research.

The Norwegian University of Science and Technology study found greenhouse gas emissions rose dramatically if coal was used to produce the electricity.

However, in some cases electric cars still made sense, the researchers said. The team looked at the life-cycle impact of conventional and electric vehicles.

In essence, they considered how the production, the use and the end-of-life dismantling of a car affects the environment, explained co-author Prof Anders Hammer Stromman.

“The production phase of electric vehicles proved substantially more environmentally intensive,” the report said, comparing it to how petrol and diesel cars are made.

“The global warming potential from electric vehicle production is about twice that of conventional vehicles.”

In addition, producing batteries and electric motors requires a lot of toxic minerals such as nickel, copper and aluminium.

Hence, the acidification impact is much greater than that of conventional car production.

“Across the other impacts considered in the analysis including potential for effects related to acid rain, airborne particulate matter, smog, human toxicity, ecosystem toxicity and depletion of fossil fuel and mineral resources, electric vehicles consistently perform worse or on par with modern internal combustion engine vehicles, despite virtually zero direct emissions during operation,” according to Prof Stromman.

With electric car production being so damaging to the environment, these cars have already polluted a great deal by the time they hit the road, the report says.

However, if the cars were then powered by electricity made from low-carbon electricity sources, they could nevertheless offer “the potential for substantial reductions in greenhouse gas emissions and exposure to tailpipe emissions” over time.

However, in regions where fossil fuels are the main sources of power, electric cars offer no benefits and may even cause more harm, the report said.

“It is counterproductive to promote electric vehicles in regions where electricity is primarily produced from lignite, coal or even heavy oil combustion.”

In Europe, where electricity is produced in a number of different ways, electric cars do offer environmental benefits when compared with cars with internal combustion engines, according to the study.

“Electric vehicles powered by the present European electricity mix offer a 10% to 24% decrease in their global warming potential relative to conventional diesel or petrol vehicles.”

This is in line with calculations made by some carmakers. 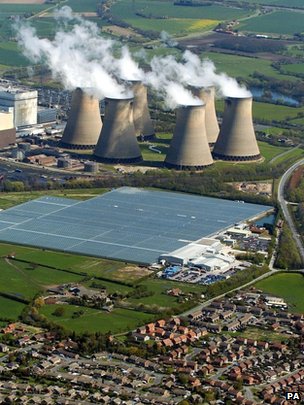 “According to our results, a battery electric vehicle, with electricity produced by the power generation mix we currently have in Europe, compares favourably in the magnitude of 10% or so with diesel,” Daimler’s chief executive Dieter Zetsche told the BBC.

The report pointed out that the longer an electric car in Europe stays mobile, the greater its “lead” over petrol and diesel engines.

“Assuming a vehicle lifetime of 200,000km exaggerates the global warming benefits of electric vehicles to 27-29% relative to petrol and 17-20% relative to diesel,” it said.

“An assumption of 100,000km decreases the benefit of electric vehicles to 9-14% with respect to petrol vehicles and results in impacts indistinguishable from those of a diesel vehicle.”

An electric car’s longevity depends a great deal on how long its battery lasts, not least since it is very expensive to replace them.

Batteries are gradually getting better, which could result in electric cars being used for longer.

However, as petrol and diesel engines are also improving, the relationships between the different types of vehicles are not constant.

“A more significant reduction in global warming could potentially be achieved by increasing fuel efficiency or shifting from petrol to diesel,” the report said.

“If you are considering purchasing an electric vehicle for its environmental benefits, first check your electricity source and second look closely at the warranty on the batteries,” said Professor Stromman.

Those in power, meanwhile, should recognise “the many potential advantages of electric vehicles [which] should serve as a motivation for cleaning up regional electricity mixes”.