Flatpack or flexible? Oscar Niemeyer’s schools could have lessons for the UK

From now on, our children will be taught in flatpack sheds and converted kebab shops. That’s the message education secretary Michael Gove has been sending out since he launched his two-pronged vision for schools: to be built from standardised kits, or else to “pop up” in whatever redundant high street unit might be to hand.

Triumphantly axing Labour’s Building Schools for the Future (BSF) programme, accusing architects of “creaming off cash” and declaring that “we won’t be getting any award-winning architects to design your school”, Gove seemed to take on the appearance of a surreal pantomime baddie, continually bashing the profession.

Issuing Dickensian diktats about the future of education, his no-frills approach to school building almost descended into farce with the James Review, in which he commissioned an expert in cheap, mass-produced retail sheds to advise on the kinds of spaces that might be good for teaching and learning: big cheap sheds was the inevitable conclusion.

But by waging war on architects – and provoking their body, the RIBA, into waging it back – both Gove and his opponents have obscured the debate we should be having: about what “standardisation” actually means. Properly developed, with the involvement of architects, might system building actually be a good thing?

Much confusion has come from the government’s own uncertainty about the right way forward. The bold call of the James Review for standardised designs, which prompted excited contractors to begin developing cheap flatpack kits, was soon sidelined in favour of “baseline” guidance. Launched in October last year, this specified that schools “should be simple rectilinear forms”, 15% smaller than those under BSF, and built for £1,465 per square metre (half the price of most BSFs). 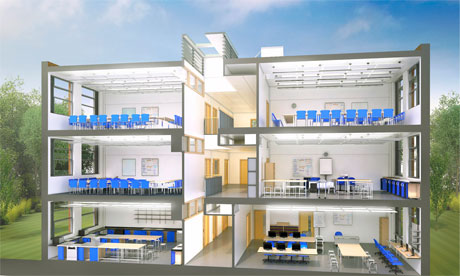 What one of the new standardised schools could look like. Image: Education Funding Agency

The RIBA slammed the “flatpack” approach as “far too restrictive” and warned that it would “place a straitjacket on future generations of teaching professionals and quickly render these schools redundant”. It claimed that the guidance showed no regard for student wellbeing, environmental comfort, accessibility or long-term sustainability.

One of the first contractors to attempt to prove them wrong was Wilmott Dixon, whose Sunesis system – which received glowing Design Council endorsement – can allegedly reduce the cost of a new school by up to 30%, and cut the build programme by about 20 weeks. Featuring “central learning streets” and “flexible teaching spaces”, it does nonetheless look like a shed, and there would be difficulty adapting it to awkward, sloping sites. So is there another way?

Architects David Chambers and Kevin Haley, of young practice Aberrant, think that there might be – and have been looking to Brazil for answers. As part of the British Council’s Venice Takeaway exhibition at the RIBA, Chambers and Haley travelled to Rio de Janeiro to investigate a little-known programme of standardised school building in the 1980s, which left more than 500 system-built schools across the state – designed by none other than Oscar Niemeyer.

The Integrated Centres of Public Education (CIEPs) were a response to an educational crisis, as mass migration from the countryside swelled the urban population. With a pressing need to create a vast number of schools in as short a time as possible, the state governors turned to Niemeyer, who developed a system based on a simple kit of concrete parts, and oversaw the establishment of a centralised factory for prefabrication.

“While criticism of standard systems in the UK has tended to focus on the desire to strip out as much of the ‘architecture’ as possible, we were fascinated to find that standardisation in Brazil was driven by a focus on extending the reach of high-quality architecture to everyone,” says Chambers. 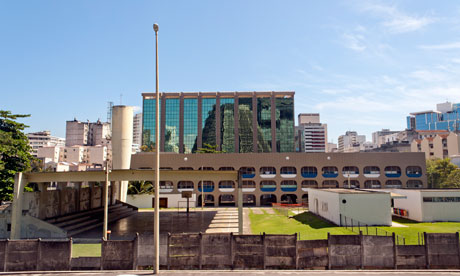 The schools were designed as clusters of separate buildings, “like a concentration of a city,” according to Washington Fajardo, president of the Rio World Heritage Institute. “You have the basic building, and then you have a series of associate buildings: an outdoor covered sports hall, an octagon-shaped library and a house on the roof for live-in pupils.”

These buildings could be configured in different ways according to the site, making it the ultimate flexible system – adapting to hillsides, city squares and leftover spaces next to major roads. But in all cases, the school stood as a proud civic beacon, designed with an emphatic, graphic presence.

“The CIEPs were often in poorer areas, such as favelas and beach towns, where there wasn’t a lot of public infrastructure, so they took on a bigger civic role,” says Chambers. “The covered playgrounds, for example, became vital public squares. It was crucial that they operated beyond the role of being a school: the whole programme was about using architecture to symbolise a new educational philosophy.”

In attempting to launch a future of standardised schools in the UK, just what kind of educational philosophy is Gove trying to promote, and how might he learn from Brazil?

Taken from The Guardian -> http://www.guardian.co.uk/artanddesign/architecture-design-blog/2013/mar/15/flatpack-flexible-oscar-niemeyer-schools