We’ve rounded up ten very interesting, much-hyped new menu items offered by large quick-service restaurant chains — including the Wendy’s Bacon Pretzel Cheeseburger, the Dunkin Donuts Glazed Donut Breakfast Sandwich, and even a few items that don’t contain bacon. Warning: It is not advisable to try all of these on the same day.
Or maybe not even over the course of the whole summer. You know, the more we think about it, how about you pick just one that sounds good and try that? 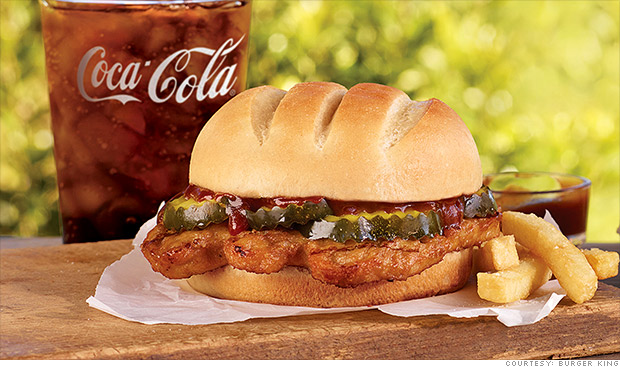 After trying the BK Rib Sandwich, this are my thoughts:
Overall, Burger King’s Rib Sandwich was pretty good. It actually felt a little like I was eating ribs and the few components worked well together. I haven’t had a McRib in a while, but I think I like BK’s version better due to better pickles and a nicely charred crust.

The kids who grew up with chicken nuggets are now adults, and KFC is catering to them with its big nationwide push of Original Recipe boneless chicken. It even looks like chicken legs and breasts with bones in them may disappear entirely from KFC menus.

After trying the KFC Original Recipe boneless chicken, this are my thoughts:
These actually do taste like original recipe, though they’re a little drier than regular chicken pieces or other strips.

When comparing the taste with their boned versions, the boneless chicken was not as juicy and, thus, not finger-lickin’ good. So, KFC, the moral of the story is: Throw me a bone here.

Sonic Drive-In rolled out 25 new shake flavors for the summer—and sells them at 50% off after 8 p.m.—including one that follows the add-bacon-to-anything trend. Instead of a simple bacon shake, this one comes with peanut butter and tiny chunks of bacon, and it’s as gluttonous as it sounds: A large packs in a whopping 1,940 calories.

My initial reaction was it tasted like a Snickers bar. I was pleasantly surprised, relieved and ready for a bigger gulp. That’s when it hit me. One of the objects floating around in the cup had made its way up the straw. I immediately stopped in my tracks, as if I was attempting to avoid oncoming traffic.

The fast-casual burrito chain revamped its margarita options in April, offering custom-made drinks featuring Patron Silver tequila, triple sec, a blend of fresh lime and lemon juices, and organic agave nectar for around $7, in addition to a $4.50 version with Sauza tequila.

It was delicious, the perfect balance of sweet and sour. And it was hands down better than a twice-the-price margarita I had ordered the night before at a popular Montrose Tex-Mex spot. The world’s largest fast food chain introduced two cool refreshing beverages for the summertime, a Dulce de Leche Shake with vanilla ice cream and caramel syrup and a new seriously fruity smoothie. Both are available at least until September 15.

Refreshing, icy blend of blueberries and raspberries, if a bit thick and weighty should you get the optional dose of yogurt (we did). The berry flavor is sweet and surprisingly passable, balanced by a splash of tart pomegranate juice. And true to fast food fashion, it all whirs together inside a giant blender at the touch of a button and is ready in seconds.

This spring, the Home of the Whopper introduced 12 limited-time menu items, including the “better for you” Turkey Burger and Veggie Burger. The 410-calorie latter option features a Morningstar Farms brand veggie patty.

That perfectly round, perfectly fake disc of visible vegetables and grains just looked wrong. And it tasted wrong, too. It had a tough, dense mouth feel that no amount of mayo (and there was a good deal here) could fix. I still can’t put my finger on what it tasted like, but it wasn’t anything in the burger family.

After testing out their diabolic donut-egg-bacon creation in April, Dunkin Donuts just announced that it will be offered nationally starting on June 7—which happens to be National Donut Day, when Dunkin Donuts and other chains give away free donuts.

It’s not as wild (or gross) as the concept might suggest. The sandwich has a sweet and salty combination that reminded me of eating French toast with eggs and bacon, drizzled with syrup. Separately, the ingredients are pretty mundane; what’s novel is putting them all in a single vessel.

After the huge success of Doritos Locos Tacos, Taco Bell tried to repeat the magic earlier this year with a version featuring a Cool Ranch Doritos-flavored shell. The new item attracted tons of customers into Taco Bell locations, but the typical review said that there wasn’t enough Cool Ranch flavor.

There’s something that is a tad off with the Cool Ranch flavor. The same sour kick with a subtle cool, creamy finish I’ve come to love from Cool Ranch Doritos chips was not completely there. It’s as if the flavor is slightly reminiscent when it first hits your tongue, but kind of just gets lost after that.

The verdict: Not the best. This combines two sacred snacks, Cool Ranch Doritos and Taco Bell Tacos, but doesn’t improve either of them.

Big things are expected from Wendy’s much-hyped pretzel-bun burger, even though the company hasn’t yet confirmed if or when it’ll officially arrive in restaurants. Nation’s Restaurant News quoted one analyst, Mark Kalinowski of Janney Capital Markets, who accompanied Associated Press reporter Candice Choi to a Wendy’s that was testing the new sandwich:
“Our industry sources inform us that the Pretzel Bacon Cheeseburger, to be launched nationally at some point during 2013, was one of Wendy’s most successful test products from the last 20 years,” Kalinowski wrote. “As such, we believe the national launch will lead to some meaningful acceleration in Wendy’s same-store sales.”

After trying it, I must say it was better than he expected, with the roll being a little heartier than the typical Wendy’s hamburger buns but still soft. Even though the beef patty seemed no different,  the pretzel roll made it a lot cooler.
It’s like something you’d see at an actual burger place, not a fast food restaurant.

“You want fries with that?” Carl’s Jr. asks. And they mean it: Inside the flour tortilla of each new San Diego Burrito is steak, salsa, guacamole, cheese, and a smattering of French fries.

The interesting part of the burrito was the french fries. It seemed strange at first, but the fries lent a starchy texture and surprising amount of potato flavor for how few fries were in the burrito. The fries made the burrito a lot more interesting, but the coverage was secluded to one side of the burrito, so not every bite benefited from their inclusion.

Now that you know what are the new fast food you need to try, go for it. Just don’t forget to exercise a lot to lose all the calories that you gain after eating all these crazy and surprisingly shocking good food!

This article was taken from another site (see link below) and posted on this blog by Andre Rosa for educational purposes.