Ukraine or the Ukraine: Why do some country names have ‘the’?

As Ukraine prepared to co-host one of football’s biggest tournaments, 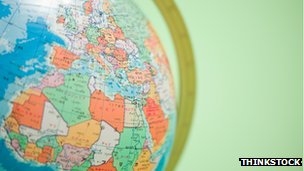 Euro 2012, why do some people call it “the Ukraine”? And why do some other country names also have a definite article?

The eyes of the sporting world turn to Ukraine and Poland, as Europe’s top 16 national teams begin a four-week football festival.

Yet the English-speaking media can’t quite agree on how one of the two co-hosts should be described. It is “the Ukraine” in the UK’s Daily Mirror, and simply “Ukraine” in the Times of India. Why the confusion?

“The Ukraine” is incorrect both grammatically and politically, says Oksana Kyzyma of the Embassy of Ukraine in London.

“Ukraine is both the conventional short and long name of the country,” she says. “This name is stated in the Ukrainian Declaration of Independence and Constitution.”

The use of the article relates to the time before independence in 1991, when Ukraine was a republic of the Soviet Union known as the Ukrainian Soviet Socialist Republic, she says. Since then, it should be merely Ukraine.

There is no definite article in the Ukrainian or Russian languages and there is another theory why it crept into the English language.

Those who called it “the Ukraine” in English must have known that the word meant “borderland”, says Anatoly Liberman, a professor at the University of Minnesota with a specialism in etymology. So they referred to it as “the borderland”.

“After the collapse of the Soviet Union, Ukrainians probably decided that the article denigrated their country [by identifying it as a part of Russia] and abolished ‘the’ while speaking English, so now it is simply Ukraine.

“That’s why the Ukraine suddenly lost its article in the last 20 years, it’s a sort of linguistic independence in Europe, it’s hugely symbolic.”

The Germans still use it but the English-speaking world has largely stopped using it.

There are many other country names that are habitually referred to with “the”, such as Congo, Gambia, Yemen, Lebanon, Sudan, Netherlands, Philippines and Bahamas.

But according to several authoritative sources only two countries, The Bahamas and The Gambia, should officially be referred to with the article.

“It’s most likely the approach of the UK Foreign Office to retain ‘the’ as the short form of the [longer] official name – The Republic of the Gambia and The Commonwealth of the Bahamas,” says Mick Ashworth, former editor and consultant to the Times Atlas.

“We will tend to take the advice of the Foreign Office and the Permanent Committee on Geographical Names (PCGN). These quite often have a long and a short form.”

In some of the other cases, says Ashworth, it’s largely a question of usage and how people refer to them. Quite commonly, definite articles are attached to areas where they have a mix between geophysical names and a physical entity.

Countries like the United States of America and the United Kingdom also carry the definite article because they are compound nouns with adjectives.

Professor Liberman says the habit of putting “the” in front of place names is heard throughout the English-speaking world and is common to Germanic and Romance languages.

“In general, use of the definite article is unpredictable. Why should it be London but The Thames? There is no logic for it yet this is the way it is.

“Sometimes country names go back to river names. As late as the mid-20th Century, everyone said The Congo because Congo is the river and named after the river, but no-one says it any more.”

He suspects that people once preferred to add the article if the place name related to a geographical feature like a group of islands (Bahamas) a river (Congo), a desert (Sudan) or mountain range (Lebanon).

“Later the phrases were shortened, but the article survived. Hence the arbitrary rule that river names, the names of deserts and mountain ranges need ‘the’.

Articles for place names appeared in English comparatively late, he says – in Old English there were no definite articles.

“All proper names and place names at one time meant something to us and some of them you still understand their meaning.

“So the Netherlands is ‘the low countries’. And as long as the meaning is clear, the article isn’t entirely useless. Sometimes it’s a relic of the past, for example the [administrative] capital of the Netherlands, The Hague, means ‘hedge’ or ‘haw’, hence The Hague with the article has been preserved.

“As far as the countries are concerned, there are all kinds of situations where this happened.

“Deutschland is German Land, so there’s nothing wrong in saying the article but there is no reason why Deutschland has no article and the Netherlands has the article.

“Sometimes the answer is more or less clear and sometimes not at all, just a tribute to a tradition of long standing.”