Imagine a country whose inhabitants work fewer hours than almost any others, whose workforce is not particularly productive and whose children spend less time at school than most of its neighbours.

Hardly a recipe for economic success, you might think.

But the country described above is none other than Germany, Europe’s industrial powerhouse and the world’s second largest exporter; a country whose economy has single-handedly stopped the eurozone falling back into recession and the only nation rich enough to save the euro.

When you consider that only the Dutch work fewer hours among the 34 members of the OECD, that German children spend 25% less time in the classroom than their Italian counterparts, and that there are six more productive economies in Europe alone, these facts appear all the more remarkable.

So why is the German economy so powerful, and what lessons can the rest of us learn from it?

There is no doubt that Germany has benefited greatly from the euro.

By getting into bed with more sluggish economies in southern Europe, Germany adopted a much weaker currency than would otherwise have been the case – as one of the very few countries in the world running a balance of payments surplus, the deutschmark would have been a great deal stronger than the euro.

This has provided a terrific boost to German exports, which are cheaper to overseas consumers as a result.

But this goes only some way to explaining Germany’s current economic might.

Just as important are the relatively low levels of private debt. While the rest of Europe gorged on cheap credit throughout the 1990s and 2000s, German companies and individuals refused to spend beyond their means.

One reason for this, says David Kohl, deputy chief economist at Frankfurt-based Julius Baer bank, is that real interest rates in Germany remained stable, unlike those in other European economies.

“In the UK, Italy, Spain and Portugal, for example, higher inflation meant real rates moved down, so there was a huge incentive to borrow money,” he says.

But cultural differences are just as significant – quite simply, Germans are uncomfortable with the concept of borrowing money and prefer to live within their own means.

“In German, borrowing is ‘schulden’, [the same word for] guilt. There is an attitude that if you have to borrow, there is something wrong with you,” says Mr Kohl.

This has been particularly beneficial to Germany in recent years – unlike its European counterparts, consumers and businesses did not need to slash spending to cut their debt levels when banks stopped lending during the recession.

Most productive economies in OECD

But there are other, deep-rooted reasons behind Germany’s current economic pre-eminence in Europe, not least in fact the relatively low number of hours spent at work and in the classroom.

Germany embarked upon a programme of fundamental labour market reform in 2003, sparked by the excesses of post-unification wage increases.

Strong employment protection legislation and a degree of trust on behalf of the workforce in well-capitalised companies that had not over-borrowed, meant the Social Democratic government was able to use its close ties with labour unions to push for moderation in wage inflation.

The reforms laid the foundation for a stable and flexible labour market. While unemployment across Europe and the US soared during the global downturn, remarkably the jobless number in Germany barely flickered.

German workers were simply willing to work fewer hours, knowing that they would keep their jobs because of it.

They were all the more willing to do so due to the stronger bond that exists between workers and employers compared with many other countries.

“There is a culture of business owners acknowledging and rewarding the efforts of the workforce,” says Andreas Woergoetter, head of country studies at the OECD’s economics department.

No wonder, then, that Germans work fewer hours than most.

School finishes at lunchtime across much of Germany due to what Mr Woergoetter calls a “societal preference”, designed to allow children to spend more time with their families.

But it’s in the later years of schooling that the German model really stands apart.

“Half of all youngsters in upper secondary school are in vocational training, and half of these are in apprenticeships,” says Mr Woergoetter.

Apprentices aged 15 to 16 spend more time in the workplace receiving on-the-job training than they do in school, and after three to four years are almost guaranteed a full-time job.

And in Germany, there is less stigma attached to vocational training and technical colleges than in many countries.

“They are not considered a dead end,” says Mr Woergoetter. “In some countries, company management come from those who attended business school, but in Germany, if you’re ambitious and talented, you can make it to the top of even the very biggest companies.”

The German education system, therefore, provides a conveyor belt of highly skilled workers to meet the specific needs of the country’s long-established and powerful manufacturing base, which is rooted in the stable, small-scale family businesses that have long provided the backbone of the economy.

There is clearly much to learn from the German model, but blind replication may not be the answer. 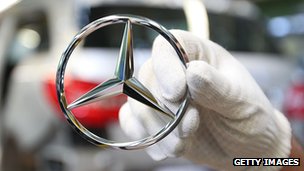 Many economies jealously covet Germany’s manufacturing prowess, particularly while demand for its industrial products in emerging markets such as China continues to boom.

And yet, not so long ago, the roles were reversed.

“Ten years ago, we in Germany were looking at the much higher value-added potential of the UK service sector,” says Mr Kohl.

“There are limits to adding value in manufacturing. If you want to be rich and move up the value chain, you need to be in services.”

As unlikely as it seems, perhaps one day Germany will once again look to others for inspiration.

From: Uncategorized
No comments yet